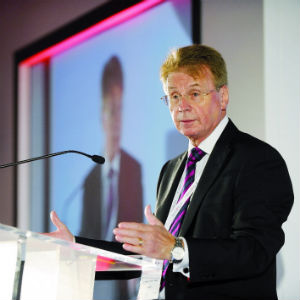 Hind Al Shehhi is communications officer at Strata, the aircraft wing- component builder in Al Ain. As she takes visitors on a tour of the 21,000 square-metre facility, she picks up an almost featherweight piece of discarded material – honeycombed plastic impregnated with resin and demonstrates its properties. Breaking off splinters from the end of the elongated triangle, a foot long and an inch thick, is quite simple, but then she places it on the ground and stands on it, and it easily bears her weight.

“It makes the plane lighter, so it uses less fuel,” Al Shehhi explains. These products, when sealed in the confines of the casing of a plane’s wing, confer extra strength, but at only 70 per cent of the weight of traditional wing components.

That’s the concept behind a new form of composite fibres that are helping the city of Al Ain revolutionise the global aerospace supply chain. Abu Dhabi’s planners would give a lot to replicate such beautifully simple ideas all across the emirate’s industrial portfolio.

Mubadala Development Company, founded in 2002 to diversify the economy of the emirate of Abu Dhabi, has been making waves for a decade. Since its aerospace unit was established in 2006, no international company has been of greater interest to the world’s aviation industry than Strata, a composite wing and empennage (tail section) aerostructures manufacturer. Quite simply, it has powered out of the blocks to become a manufacturer of global repute in less than two years.

A desert greenfield site at Al Ain’s aerospace park in 2009, the facility was completed in 10 months and is now a supplier to the world’s leading original equipment manufacturers (OEMs). Strata makes ailerons for the Airbus A330/340 families, flap track fairings for the A380 via commercial agreement with Austria’s FACC, and empennage for Alenia Aeronautica of Italy’s ATR aircraft. Next up is a contract to make spoilers for the ground-breaking Boeing 787 Dreamliner – and work on the A350. The company is 100 per cent-owned by Mubadala and has won $3 billion of orders since inception.

A key figure at Strata, which is wholly owned by Mubadala Development Company, is British engineer, Ross Bradley, who has spent 35 years in aerospace, many of them at BAE Systems as managing director of the Eurofighter programme. He left in 2002 with the Eurofighter in service to set up his own business in aviation defence in Farnborough. In 2008, he was approached by Mubadala Aerospace for the position of Strata CEO, a post he took up that year.

The vision was to take Al Ain Aerospace Park to a similar footing to Seattle and Toulouse, the operational headquarters of the world’s leading OEMs, Boeing and Airbus respectively, within a decade.

“We are now a direct supplier of Alenia, Boeing and Airbus,” says Bradley. “The aim is to be global leaders in wings and empanage.” The company is already taking work away from Europe and the US. “Airbus and Boeing are looking to reshape the supply chain. The goal for Strata is to become a ‘super-supplier’ of choice for them.”

Due to the complexity and time sensitivity of early orders, staff were sent to FACC, one of Europe’s newest plants with a reputation for lightweight plastic processing work for Boeing, Airbus, Embraer and BAE, in a contractual arrangement to share expertise.

Strata’s success has shaken up the international aviation supply chain. Earlier, Airbus wings were designed and built in Wales, with additional assembly in Spain and Germany. Boeing wings were built in-house in the US. Mitsubishi is to take on wing-building for the 787, and Strata hopes to collaborate with it. For empennage, Boeing builds its own sections in the US, while Spain does this for Airbus.

When it originally cast around for the ideal business, Strata saw that because there are hundreds of fuselage suppliers around the world, pursuing this option was a non-starter. The probability that future aircraft would contain carbon fibre and composites was very high, so it decided to focus elsewhere.

Bradley sees “three-four” direct competitors in wings and “two-four” in empennage. Wichita, Kansas-based Spirit is a spin-off of Boeing, which has also bought BAE UK assets in Prestwich and Salisbury. GKN is another player. “Then you find a plethora of sub-$0.5 billion companies all the way from Scandinavia to Spain and indeed to other places,” he says. “There are many small companies.”

“The aerostructures sector is highly competitive,” he says. “How do you win products from Airbus and Boeing? It’s hard to find a better place than the UAE. Emirates owns more A380s than everyone else put together. Emirates and Etihad are blazing the trail.”

For Bradley, it’s meant a seven-day week and 16-hour days since he joined. He is proud to say Strata has never missed a delivery. “That’s what [the OEMs] want to see. Real performance. That’s what we’ve demonstrated since operations started. We have not failed in anything we said we would do. Cost. Quality. Schedule. That’s the mantra here in Strata, satisfying customer and shareholder.”

Development of UAE nationals is key, he says. Of 500 people employed, some 30 per cent are UAE nationals. “We’ll grow that to 50 per cent plus, employing them at all levels. The Director of Procurement, the HR Director, and my deputy are all Emiratis. We’ve got some of the best people in the industry. Some 22 nations are represented. I have not found anything like this in Europe. We are a 21st century company, with Arabs, Americans and Europeans, the best people we can find.”

Bradley praises the hard-headed business attitude at Mubadala. “They are a demanding organisation, as demanding as any business I have ever worked for. They want double-digit returns. There is freedom to get on and grow the business.

You are held accountable. Investment is made on solid plans that are owned. It is a brand new company, like no other I ever worked for.”

On the A350 contract, Strata competed internationally against 13 companies. The contract was signed in early January. “As long as Strata performs, it will be the supplier of this wing structure for the life of the contract,” says Bradley. “That could be 30 years. We aim to be a disruptive company bringing new solutions to our sector very similar to the approach Toyota adopted in the 1960s/70s.

“Velocity and agility are critical for high performance in Strata, coupled with efficiency and leanness,” says Bradley. “Everything we do today is for export.”

Looking to the future, Strata hopes to build its product line and customer base. The company is coy on how it will expand, but the issue of increasing plant size is likely to arise sooner rather than later. M&A is the other route. “On acquisitions, Homaid Al Shemmari is right,” says Bradley. “There will have to be acquisitions.”

Al Shemmari, executive director, business development at Mubadala Aerospace, echoes this thought. “It will be development companies that fit in. I don’t need to acquire any of the established players, where it is likely that there are ‘luggage and legacy’ issues.”

He is also planning international cross- fertilisation to enable his staff to broaden their horizons. “Some 60 nationals, all engineers, will be sent out to Boeing, Airbus, Alenia. In two-three years, they will come back to be the nucleus of the company’s growth.” Al Shemmari also wants to see more automation in the plant and down the road, and plans to invest $200-$500 million. “Today the basic need is to ramp up experience and confidence with Tier 1 customers,” he says.

The speed of its operational start from scratch and a growing list of international customers augur well. “Hopefully, we will break even in 2013-14,” says Al Shemmari. “Strata has a good opportunity for double-digit returns. We do have a competitive advantage. My job is what’s happening tomorrow.

“Abu Dhabi has oil reserves for 150 year
s. Why are we investing in nuclear, ports, petrochemicals, industry? We are never content with the status quo. That’s the goal of what we are trying to do. Programme management, research and development, engineering design and manufacturing are all goals, as well as to become a Tier 1 instead of Tier 2 supplier to OEMs in-house.”

In a sense, Strata should be successful, as it comes with none of the legacy or baggage Bradley and Al Shemmari refer to – just 21st century thinking. And that is the reason why international OEMs could continue to come calling.