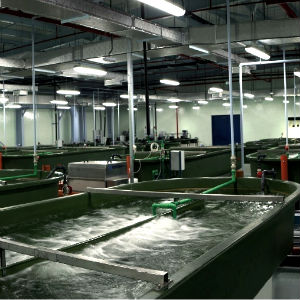 Newly imported workers toil inside steel tanks on a farm in Mustaffah, Abu Dhabi. But this labour isn’t going into building up the emirate’s new urban skyline. Instead, the workers in question are sturgeon, flown in from Frankfurt, Germany, as the foundation for the world’s largest indoor caviar farm run by the Royal Caviar Company.

The factory currently contains about 18 tonnes of the fish and it expects the delivery of another 124 tonnes this year. The first production of caviar and sturgeon fillets is scheduled for late this year. Royal Caviar expects to begin commercial sale of its osetra caviar by the second half of 2012.

“Abu Dhabi is an ideal location for distribution to the world’s growing markets for high quality caviar,” said Robert Harper, group commercial director for the Bin Salem Group, which is leading the project.

Abu Dhabi’s taste for caviar has grown alongside its economic prowess. Though Russian and other European expatriates are still the biggest customers locally, restaurateurs said the increasingly sophisticated palate of Emiratis and other Gulf residents were boosting demand for the delicacy. And executives said Royal Caviar’s location in the Gulf makes it an ideal distribution point to satiate booming appetites for the eggs in Far East markets, especially China. One gram of the Emirati caviar will cost between $4 to $6.

Harper said world demand for caviar is estimated at 400 tonnes a year. Right now, only about 120 is produced annually. Wild sturgeon from the Caspian Sea was placed on the endangered species list in 2006. Farms like Royal Caviar plan to help fill that gap in supply. At full production in 2015, the 50,000-square-metre facility will crank out 35 tonnes of caviar and 700 tonnes of sturgeon meat annually.

Royal Caviar is a partnership between Bin Salem and United Food Technologies of Germany, which specialises in aquaculture facilities. The $120 million facility features a state-of-the-art monitoring system that will ensure the sensitive fish are swimming along in an optimal environment.

Temperatures will be kept from 15 degrees Celsius to 20 degrees Celsius, depending on where the fish is in its growth cycle. Technicians will use ultrasound when the fish are three-years-old to separate the males from the females – the former go on to become sturgeon fillets. At four-and-a-half-years old, another ultrasound is performed to determine if the roe are ready to eat.

After the eggs have been harvested and the fish fillets cut, the rest of the fish – the skin, bones and head – will be ground into compost and used as fertiliser. About 90 per cent of the water in each of the tanks will be recycled through a filtration system. Any wastewater will be turned over to the Abu Dhabi Municipality as grey water for use in irrigation throughout the city.

Since Caspian and siberian sturgeon need at least four years to produce caviar, Royal Caviar flew in 22 fish from Germany to help stock the tanks in the meantime. “This year we don’t expect a profit, but we expect a profit by the second year and positive cash flow,” says Michel Nassour, Bin Salem’s chief financial officer.

To kick off the hatchery, United Technologies made a gift to Royal Caviar of 20 rare albino European sturgeon, from which the first batch of wholly Emirati caviar will be harvested. In the meantime, the company plans to unveil its line of retail products this fall. “we will make caviar available and approachable, even if it is an elite product,” Harper says. “We will help more people obtain caviar and make it a part of their special occasion protocol.”

Paving a path to build resilience within the FMCG industry

How should regional businesses float to the other side of Covid-19?

Double Your Workforce For Free