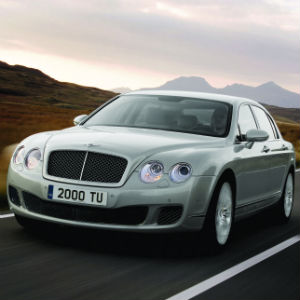 Big engines. That’s what W.O Bentley had in mind when he started his firm back in 1919. The bright turquoise, four-door Continental Flying Spur Speed sat in front of me taking up a lot of kerbside, while continuing the family tradition of big power blocks, is a world away from its post-war predecessors and the technology employed would be unthinkable to Mr Bentley in his heyday.

The Flying Spur model is the most successful 12-cylinder luxury saloon in the world, and the Speed edition I tested has a new 6-litre, twin-turbo W12 powerplant. Its 600 brake horsepower makes it the most powerful produced by Bentley ever. Maxing out at 322 km/h, and capable of sprinting from rest to 100km/h in an astonishing 4.5 seconds, the Speed engine develops 15 per cent more torque and nine per cent more power than the ‘standard’ edition.

While the paintjob on my press demonstrator is a little flamboyant, externally, it offers no other visual clues as to its racing pedigree. Its front grille and air intakes are different from the Spur and are finished in dark chrome, and the wider rifled sports exhaust offer a couple of hints that the Speed version is more a cheetah in sheep’s clothing than wolf. Other than these, there is little obvious indication that this machine could blow sportier Italian offerings into the weeds. All while opera plays tastefully on its 1,100-Watt, Naim sound system, of course. And boy, can this thing move.

The torque is formidable and starts at the low end of the rev range. A slight down pressure on the accelerator is all it takes for it to leap and strain at the leash. Acoustic glazing, tri-laminate underlays and wheel arch liners give superb soundproofing and means that the W12 doesn’t howl in your ears, but rather gives a low, restrained growl. Felt more than heard.

Which is what Bentley is all about: stupendous power, housed in unparalleled luxury. Of course, it would be a waste of ink to explain how much expense has gone into making the cabin what it is. Craftsmanship par excellence would sum it up perfectly. The handcrafted interior displays as much attention to detail as the aerospace-standard engineering and construction quality, and this no-expense spared ethos continues throughout all aspects. Gadgets galore, all fighting for space among the finest wood and hides.

There is so much detail, it’s impossible to take in just how much effort and thought went into the Flying Spur Speed at first glance. Little touches make themselves apparent the more you drive it, an experience that more cars of this bracket should offer. Behind the wheel, it’s an intuitive space. No need to take your eyes off the road for a moment, all controls fall to hand exactly where they should be, leading to instant and instilled confidence – a good thing in such a large car. Everything happens quickly at speed, and acting instinctively makes a difference.

Acceleration, as expected, is phenomenal. There is no discernable lag from the turbo-chargers. The most surprising aspect is how smoothly the 600 horsepower and tractive force is supplied. No jerkiness, no juddering, the speedo needle winds on and on calmly with no drama or theatrics.

Before you know it you’re stamping on the other pedal to restore some legality to the proceedings. Overtaking is a joy, as you can imagine. Mid-range performance is superlative and zipping into the outside lane to despatch the beige minibus and Toyota pick-up crew is addictive.

A weekend press drive, while welcome and better than nothing, is over before you know it. I wish there were more time to get to know her, as my feeling of sadness at handing her back was overwhelming. It was all too brief an encounter for this love-struck chap.