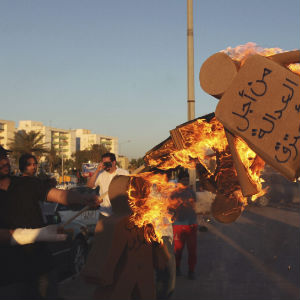 The demise of the Libyan dictatorship has thawed long frozen relations with the Gulf that could lead to wide-scale investment in a country whose political idiosyncrasies for decades denied it viable links to the region and the global economy.

An estimated $200 billion of investment opportunities will emerge over the next ten years according to the French Business Council, which recently took a large group of company representatives to Libya. They and others from countries that supported the overthrow of the regime are anxious to capitalise on the goodwill that has been generated.

In Dubai, a Libya Strategic Investment Forum was organised by the Chamber of Commerce recently, it also supported a Libya Infrastructure and Rebuild conference in the emirate.

The big question is whether the timing is ripe for these initiatives. Even though the National Transitional Council (NTC) is proposing a $54 billion budget in addition to an un-quantified emergency budget for 2012 it has little or no ability to enter into long-term contracts simply because it is an interim government.

Nevertheless observers believe that with its significant energy resources that have still to be exploited, and a potential to become an important aviation and logistics hub between Africa, the Middle East and Europe, Libya has the potential to rapidly expand its economic base.

However, there is a growing sense of unease at the slow progress in establishing any firm central authority. Recently there have been calls for eastern Libya to break away from Tripoli and there is concern is that Libya may face years of instability.

Until a functioning national army and police force is formed the existence of armed, tribally and community-based militias represent a threat to stability.

Members of the militia in Zintan, southwest of Tripoli, for example, still hold Saif al-Islam Qaddafi prisoner in spite of demands that he is handed over to the council in Tripoli.

In spite of uncertainties, work towards agreeing a constitution in mid-2012 goes on though the head of the NTC, Mustafa Abdel Jalil has stated that “if there is no security, there will be no law, no development and no elections.”

Even after such elections it may take some time before a new administration is bedded in and confident enough to award significant contracts.” The interim government in principle is unwilling to take decisions with long-term consequences, and lacks the resources to do so which is frustrating for the conduct of business,” says Oliver Miles a former British ambassador to Libya and now a director of MEC International.

But negatives can be overstated.

Physically the country is returning to normality. Telephone links have been reconnected between east and west and, at least, in Tripoli electricity supplies as well as water and sewerage networks are functioning.

Qatar Airways resumed flights to the Libyan capital in February. The airline had been among the first to re-open flights to Benghazi in the east. Alitalia has also restarted services to Tripoli.

Royal Jordanian is flying to Tripoli and Benghazi again as well as to Misrata. The latter has a large medical traffic carrying patients for treatment to Amman.

Air Malta and Egyptair resumed flights to Tripoli last November and Lufthansa in February. Antonio Tassone, the German airline’s general manager in Tripoli, commented that “the resumption of our flights is a strong and important signal to Libya and the western business community that we are confident to be back.”

Progress on unfreezing assets combined with the unexpected speed with which oil production has returned to nearly three quarters the pre-revolution level, mean that the government is able more or less to pay its way are other positive indicators.

Having plunged below 100,000 barrels-a-day at the peak of fighting upstream production of crude is reported to be around 1.4 million b/d. Pre-war levels of 1.7 million b/d will be reached by the middle of 2012 predicts Christophe de Margerie CEO of France’s Total.

International oil companies with existing contracts are beginning to return. The National Oil Corporation has said that seismic surveys have resumed at concessions run by Arabian Gulf Oil Company while fresh exploration is due to begin in the Sirte basin. Italy’s Eni has resumed offshore exploration 100 kilometres offshore Tripoli.

The Libyan stock market reopened in March albeit in more modest premises on the outskirts of Tripoli. The market though had just five stocks with another eight still to provide up to date financial information.

General manager Ahmed Karoud says that five initial public offerings may come to the market this year including oil and construction companies. There are also plans to list the country’s two mobile operators.

However, optimism needs a reality check. Few are likely to commit to long- term large scale investments where there is chronic political instability particularly if property rights are difficult to enforce and where commercial infrastructure lags far behind others in the region.

It has been suggested that GCC investors may be more culturally adept working within the currently constrained business environment than Western companies. Whether this is true or not time will tell but there is certainly growing Gulf interest in Libya.

Arriving on Etihad’s inaugural flight to Tripoli in January and accompanied by a 100-strong business delegation, Anwar Gargash, UAE Minister of State for Foreign Affairs declared that “right now our target is to play an important part in Libya’s rebuilding and create viable long- term partnerships.”

The Gulf states, Qatar in particular, played a prominent role in the campaign to oust Gaddafi providing combat aircraft for the NATO air mission as well as material and logistical support to the rebels.

Doha’s help extended beyond military and diplomatic support by marketing a million barrels of oil for the NTC at a crucial phase allowing the rebels to pay salaries in Benghazi.

In spite of the goodwill generated by such support, Gulf as well as Western interests will be nervous about the Finance Ministry’s review of all contracts signed under the previous regime.

How far this will focus on firms from countries that failed to support the rebels internationally and go easy on those states that provided diplomatic and material military support remains to be seen.

Before the uprising Qatari Diar Real Estate Investment Company had lined up $10 billion of investments with the Libyan Economic and Social Development Fund for a hotel and real estate developments near Tripoli.

Dubai-based Al-Ghurair Group, hopes to restart output within months on a joint venture in Libya’s largest refinery at Ras Lanuf and to almost double the present 220,000 b/d capacity over four years.

The group is also assessing openings in other sectors including contracting, civil and mechanical engineering as well as food production. According to Mashreqbank CEO Abdul Aziz Al Ghurair, UAE investment could increase from $2 billion to $5 billion within five years.

In 2009, Abu Dhabi-based Oasis International Power was set to take over a planned power plant at Tripoli West to be built as Libya’s first independent power plant.

Others are looking at new opportunities. Advisers working for Mohammed Alabbar, a Dubai businessman, chairman of real estate firm Emaar and a partner in Africa Middle East Resources (AMER), an emerging commodities supply chain company, have reportedly been assessing the viability of bauxite and other natural resources in Libya.

Abu Dhabi’s Al Maskari Holding is backing a $3 billion project to build an integrated energy hub involving solar and conventional generation to provide electricity for domestic use and export to Europe via southern Italy.

DP World has held exploratory talks with Libya’s interim officials on ideas for management of the country’s ports. Interim transport minister Yousef El Uheshi has said the sector needs billions of dollars of investment for the expansion and modernisation of ports and dredging to allow larger vessels access.

According to DP World’s chairman Sultan Ahmed bin Sulayem “we have always been interested in Libya and we are continuing our discussions with them.”

Conversations are likely to be extended though especially in a country where privatisation issues have yet to be tackled. “If they sort out their issues, you will see a lot of UAE companies coming in here, says Al-Ghurair,” but cautions “if it turns out to be a very slow process, they will go somewhere else.