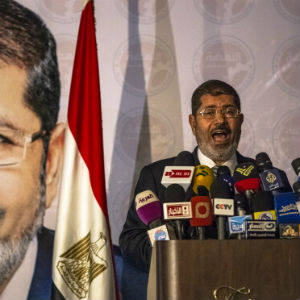 The Brotherhood said on Monday Morsy won Egypt’s first free presidential election with 52.5 per cent of votes after almost all the votes had been counted.

Ahmed Shafik, an ex-military man who was Hosni Mubarak’s last prime minister, secured 47.5 percent of the votes, Morsy campaign official Ahmed Abdel Atti told a news conference at the Brotherhood’s party headquarters in Cairo. He added that these were initial results.

The figures were based on votes counted at 98 per cent of the nation’s polling stations, he said.

At Shafik’s campaign headquarters, Ahmed Sarhan said: “I do not accept this, I will not file wrong numbers.” But another campaigner said: “I don’t think we will make it.”

The official website of Brotherhood’s Freedom and Justice Party announced in a brief message that its candidate was the “first popularly elected Egyptian president.” The group had been giving a running total that indicated Morsy had maintain a lead through the night since polls closed on Sunday evening.

An aide of Egypt’s presidential candidate Ahmed Shafik on Monday challenged the claim by the Muslim Brotherhood that it had won the vote.

“The campaign of Ahmed Shafik is astonished by the conference of the FJP that represents a violation of the laws of the election commission,” Mahmoud Baraka, the media of Shafik’s campaign, said, accusing the Brotherhood of “hijacking the election result.”

“It is the only authority entitled to issue results, however our counting of the votes have so far showed that we are ahead with 52 per cent of the vote but we refuse to break the law and issue any numbers now,” he said.

The election committee has yet to make any announcement.