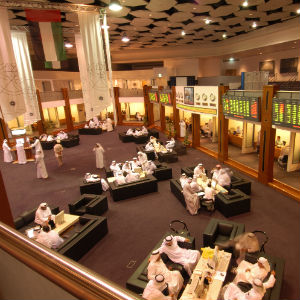 The value of shares traded on the Dubai Financial Market in February this year reached Dhs8.7 billion, an increase of 304 per cent compared to Dhs2.2 billion recorded in January, reports official news agency WAM.

The number of shares traded on the bourse also rose by 267.4 per cent during the period to reach 7.6 billion, and the number of transactions executed in February increased 183.8 per cent from the previous month.

In terms of sectors, eight out of the nine indices represented on the bourse ended February in the green, with services rising by 159.7 per cent, real estate by 37 per cent and financial services by 33 per cent.

The real estate and construction sectors contributed the most- 56.2 per cent -to the value of traded shares, at Dhs4.9 billion. Banking came next at Dhs1.4 billion, followed by financial services and investment sectors at Dhs660.8 million.

Stocks bought by institutional investors during the period reached Dhs2 billion, while stocks sold by them were valued at Dhs1.6 billion, said the report.