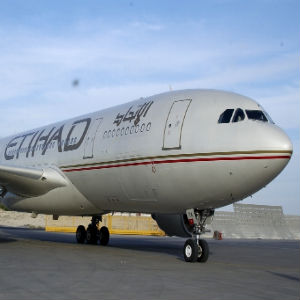 Etihad Airways announced that its revenues increased 28 per cent during the first quarter of the year to $989 million, up from $770 million during the same period a year ago. The airline recorded an average seat factor of 76.5 per cent during the period, with passenger numbers rising by 500,000 to 2.4 million, the carrier said in a statement.

“We met all our revenue targets and budget estimates in the first quarter, despite challenging economic conditions confronting the international community,” the airline’s CEO James Hogan said in the statement.

“Despite tough economic times we believe our business model of organic network growth combined with codeshare partnerships and strategic equity investments will enable us to continue to prosper and ensure sustainable profitability,” he said.

Etihad acquired 30 per cent of Germany’s airberlin in 2011, bought a 40 per cent stake in Air Seychelles in February, and has also signed an MoU with China Eastern Airlines.

“Investment in Air Berlin and Air Seychelles are already bearing fruit and we are starting to see both revenue and cost benefits from synergies with each carrier,” Hogan said.

In the first quarter of 2012, Etihad launched flights to Tripoli, Shanghai and Nairobi. The carrier said that it is soon going to introduce services to its first South American destination and to Vietnam. It will also increase the frequencies of flights operating to Asia and Australia.

Etihad posted its first annual net profit in 2011 since it began operations nine years ago, at $14 million.