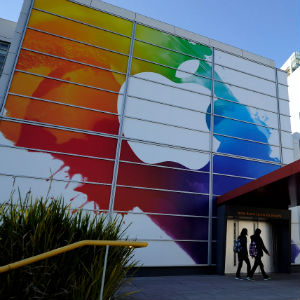 Three brands from the Middle East made it to the Top Global 500 Brands list including Emirates Airlines and Etisalat from the UAE, and STC from Saudi Arabia.

The ranking of Emirates Airlines has gone up from 291 to 287 this year, and its brand value has also risen to $3.7 billion from $3.6 billion in 2011. However, telecoms operator Etisalat is ranked one spot lower than last year at 363 with a brand valuation of $3.1 billion. Saudi Arabia’s STC has jumped significantly from 450 to 401, and its now valued at $2.8 billion.

The number one brand is Apple, according to Brand Finance, which studies brands across the world to create the annual list.

With its latest iPad just released in the market, Apple tops Brand Finance’s Global 500 list with a brand valuation of $70.6 billion.

This year, technology lifestyle brands dominate the entire list, increasing their standings on last year’s table by 79 per cent. In all, 49 technology companies appear in the list, making it the most valuable sector.

Brand Finance also found that despite the slow global economic growth, consumers prefer luxury and indulgent brands. “The global downturn has spawned a new breed of recession proof and aspirational “Alphabrands” which we turn to for quality regardless of the economic conditions,” the company said in a statement.

“It is an encouraging sign for the economy to see that the overall value of the Global 500 increased by 3.3 per cent to $3,415 billion from last year,” said David Haigh, CEO of Brand Finance.

“Brands from emerging economies are beginning to make their presence felt impressively. Eight of the Top 100 global brands and fully 47 of the Global 500, are from the BRIC nations,” said Gautam Sen Gupta, Managing Director of Brand Finance Middle East.

1.Apple – The technology giant has jumped from the eighth position in 2011 to first position this year and boasts a brand valuation of $70.6 billion.

2.Google– It has been pushed down from the top spot last year and has a brand valuation of $47.5 billion.

4.IBM- Retains the fourth position from last year with a brand valuation of $39.1 billion.

5.Walmart- The first non-technology company on the list, the retail giant comes fifth with a brand value of $38.3 billion.

6.Samsung- The first and only Asian company in the top ten, Samsung has jumped from the 18th position last year and has a brand valuation of $38.2 billion.

7.General Electric- With a $33.2 billion brand valuation, the manufacturing company has maintained its 2011 position in the list.

8.Coca Cola-The beverages brand has leaped from the 16th spot last year and is valued at $31.1 billion.

9.Vodafone- The UK telecoms company has fallen from the fifth spot in 2011, and has a valuation of $30 billion.

10. Amazon- The fifth technology company in the top ten, Amazon has jumped 22 spots from 2011, and boasts a brand valuation of $28.7 billion.