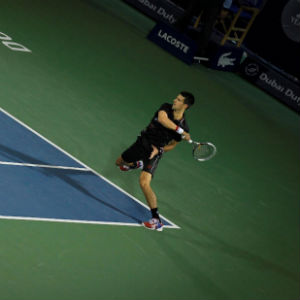 For Christopher Chenut, the CEO of Lacoste, the Dubai Duty Free Tennis Championship is work and fun. His firm has been sponsoring the event for the last five years, and Chenut loves tennis.

“I enjoy it [the game] and it’s easier for me to be a part of the brand’s story because I love sports and I love tennis,” he said.

In Dubai to promote Lacoste during the event, Chenut said that despite the global financial slowdown, the brand has been doing well across the world.

“We made a double digit growth last year in 2011 and between 13 and 14 per cent in terms of sales. Worldwide we are reaching around 4 billion in terms of turnover in sales,” he said. “And we think we should grow around 10 per cent this year.”

Lacoste, which started as a sports-apparel brand for men, has now expanded into clothes for men, women and children, footwear, fragrances, leather goods, eyewear, watches and fashion jewellery. It is present in 120 countries through its distributors and licensees, and according to Chenut, the brand’s strong presence in emerging markets has helped it to grow and do well.

“When we are not in a country, its only because of business and political reasons, which means its truly not possible to be there,” he said. Lacoste was one of the first brands to enter China, the first international brand in Brazil, and it came to the UAE more than 20 years ago, he added. It currently partners with the Chalhoub Group in the Middle East.

Going ahead, Chenut hopes that sponsoring events like the Dubai tennis championship will further increase the brand’s visibility in this region.

“Tennis amateurs all over the world are among our core business targets and tennis is part of the Lacoste history,” he said. Lacoste provides the outfits for everyone participating in the tournament including sponsored players, officials and ball kids.