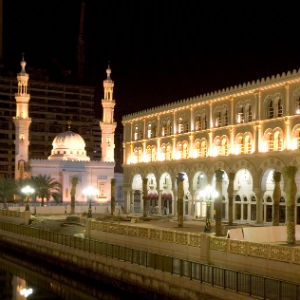 Sharjah attracted 1.56 million tourists in 2011, according to the annual report released by the Sharjah Commerce and Tourism Development Authority (SCTDA at the International Tourism Bourse (ITB Berlin).
The occupancy rate at the emirate’s hotels and hotel apartments reached 74 per cent last year, compared to 73 per cent in 2010, said the report. The total number of hotel and hotel apartment rooms in the emirate also increased six per cent year-on-year to reach 9,123 in 2011.

“The emirate expects to increase the number of hotel rooms in the emirate to go up to 12,000 over the next four years, with a focus on five star and three star hotels and beach resorts,” Mohamed Ali Al Noman, SCTDA’s chairman said in a statement. “We will ensure complete cooperation with all government and private agencies to ensure investment environment is safe and things go off smoothly and swiftly for everyone concerned,” he added.

The emirate has been working hard towards attracting tourists by holding cultural events across the year, Sheikh Sultan bin Ahmad Al Qassimi, chairman of Sharjah Media Corporation told reporters at the exhibition.

The emirate hosts around 3000 events every year including the Formula One Power Boat World Championship, Sharjah Light Festival, Sharjah Heritage Days, Sharjah Theatre Days and the Sharjah Biennial, among others, he said.

“Sharjah’s ancient culture is also reflected through its 22 museums which hold valuables that cannot be found anywhere else,” he added.

The Sharjah Investment and Development Authority (Shurooq) has also announced two new tourism initiatives: a cooperation agreement with the City sightseeing worldwide company to launch tour buses in the city; and operating seaplane tours of Sharjah in collaboration with Seawings.

“Our objective is to put the emirate in the league of the world’s top and most popular tourism destinations and double the number of tourists visiting the emirate annually,” SCTDA’s Al Noman said in the statement.