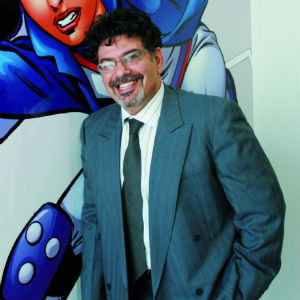 It’s 8am on a Saturday morning at the Westin Hotel, Dubai, and I’m meeting Dr. Naif Al Mutawa for breakfast. We’re both equally bleary-eyed but the doctor and creator of Islamic superhero series THE 99 has an excuse. Al Mutawa has just dropped in from a ten-day stint in Puerto Vallarta, Mexico and Washington DC, US. A regular conference speaker, animation editor, business owner, clinical psychologist and father of five boys, it’s a wonder he’s awake at all. “I try to keep my travelling in blocks,” he says.

THE 99 is the world’s first superhero animation based on Islamic culture and society; what began as a print comic in Arabic with 99 characters based on Islamic values grew into a global phenomenon – the comics were translated into English and sold in the US, followed by a TV series in conjunction with Endemol and the film The 99 Unbound, which premiered at both New York and Dubai’s film festivals last year.

And there are more global TV distribution rights in the pipeline – “that’s where you make money – from exposure and selling merchandise.” Hasn’t he made money already? “Not really.”

And somewhere along this whirlwind journey Al Mutawa even gained a shout out from American president Barack Obama for highlighting tolerance and peaceful values.

The Kuwaiti doctor – an entrant in the Gulf Business 100 Most Influential Arabs this year – says he dreamt up THE 99 to solve a social problem, to stop the spread of misinformation and highlight the true values of Islam.

The most striking thing about Al Mutawa is that he is a man who thinks deeply: about language, about building bridges between ideas and cultures, and making sense of the ever-expanding web of information and misinformation that is in danger of engulfing us. But it was only later in life that the had THE 99 Eureka moment.

“The idea came to me in London in the summer of 2003 and I was in a cab from Edgware Road to Harrods – it’s a pilgrimage that every Kuwaiti makes at least once a lifetime,” he says, with a smile.

“My sister asked me if I was going to go back to writing for kids. And it wasn’t something that was on my mind at all,” he says. “I’d been to a top business school and university and all I wanted was a real job. And I said to her: “For me to go back to that now I’d have to do Pokemon.”

But Al Mutawa started to play with the idea and by the time he got to Harrods he had the initial spark for THE 99.

The doctor raised the initial $7 million funding from all the people he’d known and grown up with over the years. Since then he has raised $40 million. His most recent investor, private equity firm Abraaj Capital, had previously turned him down in 2004 and 2007, he says.

“I finally cornered the CEO Arif Naqvi at the WEF forum in Morocco in 2010. I said: ‘ I heard you came here on a private plane, is it true?’

‘I think this may be inappropriate but can I fly home with you?’

‘But you don’t live in Dubai, you live in Kuwait.’

“I told him I’d figure it out and I got on the plane. He had nowhere to go without a parachute and I pitched it.”

Al Mutawa commends Abraaj Capital for their support of entrepreneurs through its WAMDA and RED ecosystems. “For me, there was no ecosystem in the beginning, I used my own petri dish, but they say when you need to make it happen, you make it happen.

“The problem is that the Kuwait government employs 90 per cent of the population, and the outlook is ‘there is a limited cake made of oil and how much more of it can I get?’ The reality is the minute someone comes up with an alternative solution that culture is dead. You need to have people looking at what can they can create to create wealth for themselves.”

“Our great rulers need to not only talk about success, but also admit the mistakes they’ve made and what they learned from them. not just the grandiosity stuff, but also the problem stuff – that’s what makes it safe for people to venture their own way and make their own mistakes. The story of what failure means needs to be retold. For me, at times, my ego got in the way; at times I had decisions that I thought were good but ended up being bad. But that’s where learning happens.”

The doctor says that successful entrepreneurs will never make the same mistake more than twice – and be tenacious. And that includes talking your way onto private planes.