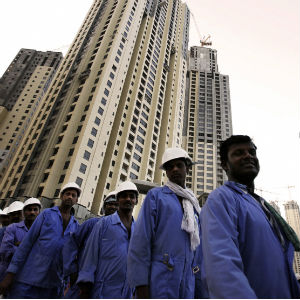 The UAE has stepped up measures to reduce the exploitation and abuse of South Asian migrant workers building the $27 billion Saadiyat Island in Abu Dhabi, Human Rights Watch (HRW) said in a report on Wednesday. But protection gaps still remain, warned the rights group.

“The gaps include reimbursing workers for recruiting fees, which often take months or years to repay and are the single greatest factor in creating conditions of forced labor. Human Rights Watch also found lapses in effectively punishing abusive contractors and following through on promises to make monitoring reports public,” said the HRW report.

“For too long, migrant workers in the UAE have toiled in abusive conditions, with private and public developers showing little concern,” said Sarah Leah Whitson, Middle East director at HRW. “Now, finally, Emirati developers and their international partners have stepped up to the plate on Saadiyat Island to start to protect workers, but they will need to do more to curtail the abuses,” she said.

In 2009, HRW had published a report severely criticising the working conditions of migrant workers in the UAE, claiming that they were not paid wages; they had to pay unlawful recruitment fees in their homelands; and that their passports were illegally confiscated.

In March last year, a group of 130 international artists even announced that they would boycott the Guggenheim Museum- which is being built on the Saadiyat island- over the abuse of workers.

In its latest 85-page report, HRW states that the current scale of the problems is not as bad as in 2009. The appointment of independent monitors in 2011 to detect and report publicly on violations of workers’ rights on the island was a significant and positive development, the report said.

The Saadiyat island, which is set to become a cultural hub in Abu Dhabi, will include local branches of New York University, the Louvre and Guggenheim Museums, among other projects.